Risk-on trades and the reflation narrative were already dominating financial markets but now the Biden administration has control of both houses of Congress, the incoming president has a clear path to implement his policies, especially on budgets and spending. Expectations of increased fiscal support for the US economy, including a mooted additional $1 trillion in pandemic relief, are building. Consequently, US inflation expectations are at their highest levels since 2017 and 10-year US Treasury yields have broken through 1% to a 9 month high. The maxim “when America sneezes, the world catches a cold” still applies, so do UK borrowers need to be concerned about a follow through to GBP interest rates?

As a rule, global markets take their lead from the US and the gravitational pull of US markets can be seen in the chart of 5-year US and 5-year UK term interest rates below. From 1993 to 2016, US and UK term interest rates were highly correlated through a number of economic cycles. In fact, rates have only materially diverged twice in over 30 years; in the early 90’s when interest rates in the UK rose well above their US equivalent due to double digit inflation in the UK and the ERM crisis and more recently since 2016, when the MPC cut interest rates to support the UK economy in the wake of the EU referendum. 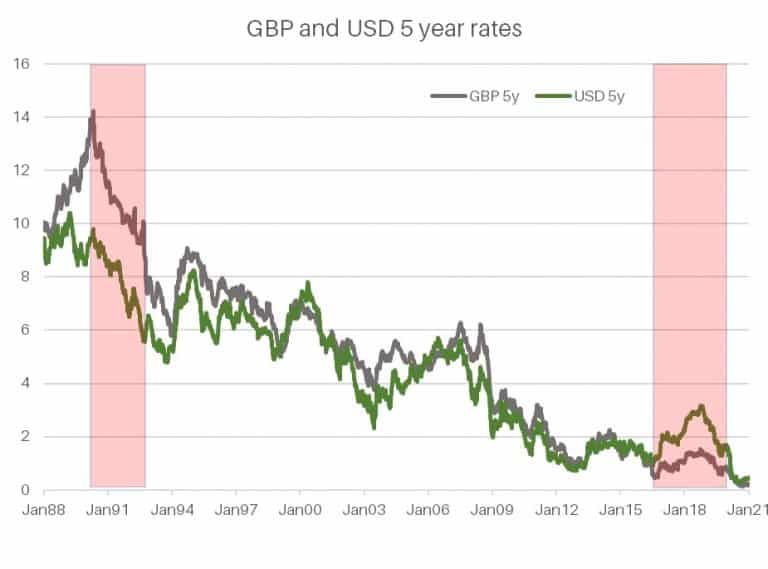 The recent performance of 5-year UK and US term rates since 2015 can be seen in more detail in the chart below. The divergence since the EU election in June 2016 is marked and although term rates converged in H1, 2020 due to the similar monetary policy decisions taken by the central banks, they have started to diverge again as markets have begun to buy into the reflation narrative coming out of the US. The question now is whether UK rates follow suit? 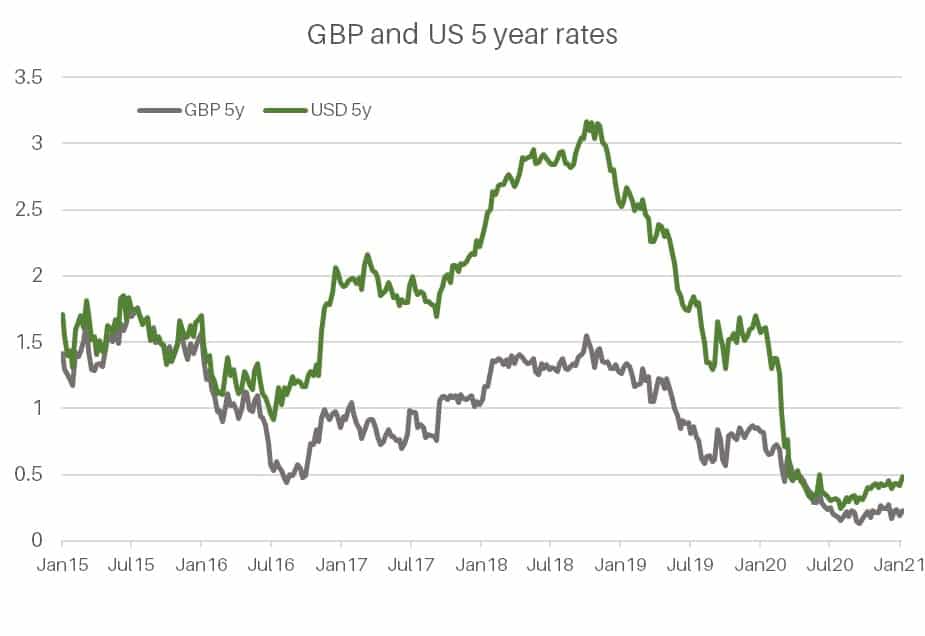 Interest rates aren't going anywhere, so why is this relevant to me?

While US term rates are moving higher, the financial markets don’t expect either the Federal Reserve or the Bank of England’s MPC to raise official short-term benchmark rates anytime soon. In fact, markets attach a 95% chance probability of no change from the Fed or the MPC at their next meeting and have even priced in a 5% chance of a rate cut. So, if markets aren’t pricing in rate hikes, can’t hedging this risk wait until they do?

It’s important to understand that by the time the central banks change interest rates at one of their regular policy meetings, the rate of interest on a typical 3 or 5-year term will have already flexed- and will not just price in the upcoming rate change but a whole series of changes over a full rates cycle.

A real example of this price action can be seen quite clearly in the chart above. The Federal Reserve embarked on an interest rate raising cycle in December 2016 and over the next 3 years raised the Fed Funds rate from 0.25% to 2.50%. However, 5-year fixed rates (green line) began to rise from 0.90% in July 2016, 6 months before the Federal reserve made their initial change. 5 year rates reached 1.30% in November 2016, when term interest rates spiked an additional 0.50% higher as it became clear that the Federal Reserve would move on rates at their next meeting the following month.

It pays to be pro-active when managing interest rate risk. This is especially true now as, between the pandemic and Brexit, there is so much bad news baked into term UK interest rates that the real or opportunity cost of being wrong is so much lower now when you are entering into transactions that are priced off an interbank interest rate curve that is close to zero.

Future events are random- your future cash flows don't have to be!

If there’s one thing that we should have learned over the past year, it’s that everything can be predicted except for the future. Events like the COVID-10 pandemic and looking further back, the Global Financial Crisis and Brexit are random, unexpected, low probability/ high impact events that have dramatically changed lives and economies.

Future events are random and we can expect that financial markets will continue to be volatile- but your future interest expense cost line doesn’t have to be. The risk/ reward trade-off is skewed in the favour of borrowers looking to ensure that floating rate bank debt can stay close to zero for the next 3-5 years and borrowers should take the time to make an informed decision as to whether an exposure to interest rate risk is something that’s worth carrying. As usual, the team at Vuca Treasury are on hand to help guide you through this process.